NZ must help to break UN paralysis on Myanmar 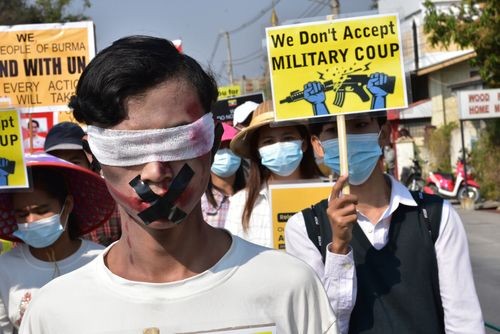 Protesting in Myanmar in 2021

Myanmar, and its appalling human rights, is dominating the news in Asia/Pacific. Over 100 peaceful protesters were fired on and killed by the Myanmar police. How bad is that?

Now countries in the Pacific, NZ and Australia among them, must do something about it. I read this on Tuesday. It shows how close NZ is to Myanmar.

New Zealand has joined an international chorus of condemnation of Myanmar's military, after a weekend which saw over 100 peaceful protesters - and innocent bystanders including children - dead.

OPINION: On March 8, a young man, Hsai Wan, was arrested in Lashio, northern Myanmar, for participating in a peaceful protest against the military coup. He has been in prison since then and faces a two-year sentence.

Hsai Wan spent six months in Wellington last year, studying at Victoria University, and lived in our home. He is a quiet, intelligent young guy, very committed to his job as a community and youth worker in rural Shan state. There are reports that he has been tortured, and we fear for his safety.

Led by the young, and supported by unions and other civil society organisations, millions of people are participating in peaceful protests, and refusing to do their jobs in government and other sectors. These include health, education, and transport, and key private sector services such as banking. The New York Times reported last week that up to 90 per cent of national government activity has ceased, and many banks and factories remain closed.

Hsai Wan, 28, spent six months studying at Wellington's Victoria University in 2020, before returning home to Lashio, Myanmar. He was arrested on March 8.

Having had a taste of democratic government, the people of Myanmar clearly don't want to return to the oppression and economic ruin of the military rule they endured from 1962 until 2010. They are angry at the arrogance of the military in stealing power from the government of Aung San Suu Kyi, which they had just re-elected with an overwhelming majority. They still hope for a better life for their children.

Prevented from gaining effective control of government, the military junta has responded with a ruthless killing spree against unarmed citizens.

This has so far claimed more than 400 lives, including the cold-blooded slaughter of more than 120 people on Saturday, apparently retribution for daring to protest on Armed Services Day. The slaughter was seemingly supported by the presence at the military parade of the deputy defence minister of Russia, the junta's new sponsor.

Hsai Wan outside Ross Wilson's home in Wellington, where he stayed while studying at Victoria University.

It is clear that the junta strategy is to terrorise the population into submission. So far, it's not working. The opposition is desperate and deep, and a common comment is "it's do or die". The courage of these young people in the face of live bullets, many targeted at leaders (25 per cent of deaths have been from sniper shots to the head), is testament to their determination to restore democratic government to their country.

But how long can they sustain this peaceful movement against a ruthless military junta well equipped with hardware from many countries, including some in the West? It is estimated that more than 30,000 people were killed putting down the 1988 student-led uprising. Will other countries in the region sit by while this is repeated in 2021, in full view of the international media?

And if support for people fighting desperately for democracy doesn't move leaders and governments in our region, perhaps other interests will motivate them. Myanmar is in a key geopolitical position between China and India.

Anti-coup protesters take cover during a protest in Yangon on Sunday.

China has its economic and transport corridor planned to cut across Myanmar to provide vitally important access to the Indian Ocean; Singapore has made huge business investments in Myanmar over the past 10 years; Japan is the largest development donor; and many countries, including the European Union, United States, Australia and New Zealand, have been scrambling to build trade with this economy, which has been growing rapidly under democratic rule.

Our Government moved quickly to state its strong public opposition to the coup, and our ambassador and the Ministry of Foreign Affairs and Trade are no doubt working hard through diplomatic channels. Key Asean countries such as Singapore, Indonesia, the Philippines and Malaysia have opposed the coup, and China has expressed disquiet.

We can only hope that these governments are going to ensure that the call by United Nations Secretary-General Antonio Guterres for the coup to be reversed will be achieved. There is a role here for principled leadership from New Zealand.

Time is running out as the Myanmar military increase their killing campaign against peacefully protesting citizens. They can only be emboldened by the apparent paralysis of the UN and the multilateral system failure to discharge its responsibility to protect.

* Ross Wilson is the chair of UnionAID, a registered charity, which provides development support to workers and unions in a range of Asia-Pacific countries, including Myanmar.