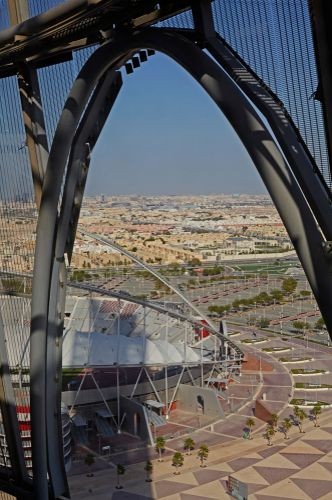 The Aspire Zone Stadium, Doha, Qatar. The complex is an important feature in the 2022 FIFA World Cup bid submitted by the Qatar Football Association.

It is rare for foreign workers to be treated well in the Gulf States. The region is rife with stories of poor living and working conditions, with all workers having their passports taken by their employees, which effectively makes these workers "slaves". They may not get paid.

That is not unusual.

As an ex-pat financial journalist, I had my passport taken by my employer. I was a "slave", except I wasn't - because I had another passport my employer, and the authorities didn't know about. Just as well.

Qatar is not an exception when it comes to human rights. In fact, it is arguably worse than other countries in the region, because it probably still has an archaic labour law. When I arrived in Dubai in 1995, it's labour law was also archaic. You had to get the permission of your employee to move to another company and there was one day off a week, if you were lucky. Friday.

Fortunately, there was a complete overhaul of the labour law after a couple of months. I don't think this is the case in Qatar. The holding of the FIFA World Cup in the small city state in 2022 has put the country under the spotlight again, especially from the United Nations. It has been reported that 6,500 workers, mostly from South East Asia, have died since Qatar was awarded the hosting of the World Cup in 2010.

This report from Al Monitor explains it in more detail.

The Dutch government has put a trade mission in Qatar on hold due to concerns about workers' conditions in the Gulf state ahead of the 2022 World Cup soccer tournament.

The Netherlands planned to hold a trade mission via videoconference with Qatar from March 22 to April 1. However, last week, The Guardian reported that a staggering 6,500 workers from South Asia have died in Qatar since 2010, when the country was awarded the tournament. In light of the British news outlet's report, the Dutch government decided to postpone the event until it hears from Qatar on the alarming death toll, Reuters reported Tuesday.

"We have talked before with Qatar about the poor conditions for these workers, but these numbers give the discussion a new meaning. We want to hear Qatar's response before we can think of a new date for the mission," said a Dutch Foreign Ministry spokesman, according to the outlet.

Human rights groups have been criticizing Qatar for the conditions foreign workers face there. Many of the concerns relate to Qatar's preparations for the World Cup. Workers who built the massive Al Bayt Stadium for the association football event were not paid several months following its completion last year, for example. Qatar introduced labor reforms in September under international pressure.

Winning the bid to host the World Cup was a major achievement for Qatar. It will be the first time the major soccer tournament is held in the Middle East.