Geopolitical dimensions of energy conflicts in the Eastern Mediterranean 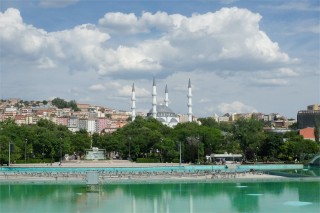 In this article, Ahmad Abdul-Rahman, writing exclusively for LDC, discusses how energy finds in the Levantine Basin will affect geopolitics in the Middle East and beyond.

The Turkish expansion towards Libya and the start of exploration for energy sources shed light on the potential geopolitical dimensions of energy and influence conflicts in the Mediterranean in the second decade of this century.

Several recent events related to the extraction and ownership of natural gas in the eastern Mediterranean region have emerged, including the dispute over the maritime borders between Lebanon and Israel and Turkey's refusal to start any exploration operations in Cyprus - as long as it remains divided.

This branched out into tensions between Egypt and Turkey, as the latter rejected the 2013 treaty demarcating the maritime boundary line between Cairo and Cyprus, as it violates its economic rights. This tension escalated with Egypt's initiative to establish the Eastern Mediterranean Gas Forum in 2015 after major discoveries in Egypt. The forum includes Israel, Jordan, Cyprus, Greece, and Italy. On 16 January 2020, France officially requested membership in the forum, while the EU and the U.S expressed their desire to join as permanent observers

Hence, the overlapping of the maritime borders between Egypt, Israel, Cyprus, Lebanon, Turkey, Greece and far away Libya hides a race to win new wealth in the Levantine Basin, which some likened to the anticipated gas boom in the Arab Gulf in the early 1970s. However, estimates of reserves in the Levantine Basin, which amount to at least 3,454 billion cubic feet of gas, and its proximity to Europe, make it comparable to the North Sea.

Since the Levantine Basin is surrounded by seven countries that have been in conflict with each other for decades, this will complicate the discoveries and the actual estimation of the quantities of gas. Moreover, the intersection of the power struggle among major and regional powers could threaten to take the conflict over the gas resources in the region into more dangerous dimensions in the near future.

The importance of water in shaping the Middle Eastern landscape cannot be ignored, considering that the lack of water resources played a role in the outbreak of the June 1967 war. Today, the conflict between Egypt and Ethiopia over the Grand Renaissance Dam over the Nile is a source of growing concern.

Today, in parallel with the discoveries of shale gas and petroleum, and the prospect of depleting crude oil resources, the focus on natural gas is increasing. Therefore, Russia, which is one of the first in the LNG export market (it alone owns about a quarter of the total proven gas reserves in the world, and its production constitutes 71 percent of gas imports to Central and Eastern Europe), is alert to discoveries in the Levantine Basin that threatens its hegemony on the European market. This development could free the EU from dependence on Russia in the field of LNG energy. It is clear that through the Russian bases on the Syrian coast, Russia is weaving a policy that depends on remaining as major player in the Middle East

Consequently, we are facing a new energy scene in the Near East, as modern technologies for gas and petroleum exploration in deep depths have highlighted the possibility that the Eastern Mediterranean basin contains LNG reserves that are estimated at 122 trillion cubic feet. This region is also the gateway to the world's major oil and gas reserves. From Egypt to Syria via Lebanon, Israel and Cyprus, this resource is a double-edged weapon in a region witnessing an international cold war, proxy wars and chronic regional crises.

In a short period, Egypt and Israel could become the main gas exporters, as future production will be much greater than the needs of their domestic markets. In addition, because quantities of this gas will be liquefied in the existing Egyptian facilities, exports will go from there to Europe, where the production of the North Sea and the Netherlands declined sharply.

The start of exploration drilling off the coast of Cyprus also indicates that the Levantine Basin may contain huge gas reserves. Like Israel, Lebanon will be home to large gas reserves in its exclusive economic zone (EEZ). Syria is likely to have the largest oil reserves in the Levant, in addition to the possibility of new gas and oil fields in northern and western Iraq, which are still awaiting release.

The issue, then, goes beyond the delineation of maritime borders and exclusive economic zones. It is related to the ability of each country to defend its sovereignty, rights and interests during an era of collapse, disintegration, or subordination of some of the Arab states concerned such as Syria.

However, the most dangerous front is Turkey's endless ambition to find energy sources in the Mediterranean Sea, opposite Cyprus, Libya and Greece. A hybrid theory in international law and international relations is about the "great blue homeland" by which Ankara justifies its ownership of wide coasts up to the Aegean Sea. "Blue Homeland" was a term recently coined and used by Ankara about the concept that Turkish Defense Minister Hulusi Akar summarized as targeting Turkey's imposition of its control over the surrounding seas, such as the Black Sea, the Aegean Sea, and the Mediterranean Sea.

All these developments could be the beginning of long-term conflict between countries of the region. But at least there are regional and international restraints that would make it better for sharing energy resources, rather than dying for water, oil or gas.

Over time, recent discoveries will have their effects on general balances in the geopolitical landscape in the Middle East.