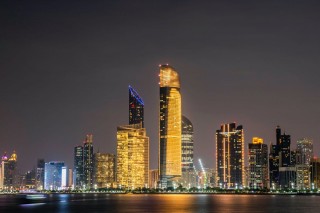 The Abu Dhabi skyline, the seat of the UAE government

In this article, the UAE Minister of Cabinet Affairs, Mohammed Al Gergawi, outlines what he believes are the five new trends of future governments.

He states that "the world will enter a new phase that will challenge many beliefs and convictions and introduce new rules on both the economic and social fronts. Governments will need to understand the world's new rules and the major future trends to be able to adapt to a post-COVID-19 world."

After six years of devastating conflict that embroiled 30 nations – the world's great powers aligned in opposition – the Second World War (1939-1945) ended with over 50 million dead, 80 million casualties and $40 trillion of economic losses. The worst man-made disaster of the 20th century left behind unprecedented humanitarian, economic and political disaster.

However, as life teaches us, crises yield opportunities for change. The war's devastating effects led to the formation of the United Nations and to unifying the world around the Universal Declaration of Human Rights. The International Monetary Fund and the World Bank were established, the Marshall plan not only facilitated the rebuilding of Europe but led to the rejuvenation of industrial production and innovation. Computers, the jet engine, nuclear power, antibiotics and countless other key innovations transformed the wealth of nations and their people. The European Union was born out of the ashes of that war.

Today, humanity is fighting an unprecedented war against a common invisible enemy that transcends geographic, economic and geopolitical boundaries; a war that marked the beginning and ending of 2020 and shook the world's most progressive and advanced nations, and their healthcare systems. The novel coronavirus pandemic has claimed more than 2 million lives and caused a global economic loss that has so far exceeded $11 trillion, leaving no nation unharmed. It is, therefore, worth asking: what are the major changes that the world will witness once this new conflict is over?

I personally believe the world will enter a new phase that will challenge many beliefs and convictions and introduce new rules on both the economic and social fronts. Governments will need to understand the world's new rules and the major future trends to be able to adapt to a post-COVID-19 world. Here are five new trends expected to define the performance and direction of future governments:

First, reverse globalization: The global health crisis has forced nations to shut their borders and restrict mobility. Governments have had to direct their focus internally towards re-establishing and restructuring logistics supply chains. The crisis revealed nations who were too focused on seizing supplies at the expense of others, increased the geopolitical competition among economic powers and shook the faith of governments in globalization. Governments have, of necessity, become less altruistic, placing their national interest as their top priority and focused their strategies on national industries, particularly food and pharmaceuticals. Since the concept of globalization has been strongly challenged, we will witness a rise in bilateral economic, tourism, food and health agreements among nations. Governments need to be prepared for a new, less globalized world where partnerships are critical to success.

Second, trust in governments: the pandemic has driven the public to turn to their governments and increased the reliance on governments to manage different sectors, particularly services. The Edelman Trust Barometer revealed a remarkable surge of 11 points in government trust to achieve an all-time high of 65%. The crisis has created a high sense of nationalism in many countries, which leaves world governments with a golden opportunity to cement and maintain this trust and build on their successful crisis management. Some countries, on the other hand, have completely lost public trust due to their poor crisis management. We have seen governments collapse in the face of the crisis, paralysed and incapable of meeting the challenge.

Third, national data parallels sovereignty: Until recently, governments have turned a blind eye to the movement of data across continents, seeing the free movement of information as key to facilitating their integration into the digital world. However, the crisis has brought a global shift of economic, social and educational activities to embrace online tools, leading millions to work, study and practice their daily activities from home. With this new emphasis, the need to protect data has become equivalent to protecting national economies, borders and sovereignty. Data protection and security tools and policies will have an exponential impact over the coming phase, and governments will need to develop systems that safeguard their digital privacy and data sovereignty.

Fourth, new models of governance: Many governments tried to adapt to the digital world over the past few years, but they always faced challenges related to budgets, bureaucracy and traditional systems that resisted change and innovation. The pressure that the pandemic has placed on governments to change their approach will introduce a radically new model of governance. Today, governments are required to establish new work-from-home and ecommerce rules. They will need to draft legislation to support digital activities and develop human resources and online productivity. There's a critical need to introduce new, agile models of service delivery that meet people's aspirations and empower governments to overcome their emerging challenges.

Lastly, partnering with the private sector is no longer an option: The pandemic has made governments realize the private sector's existential role at times of crisis given its ownership of medical, research and logistical resources, people's data and ability to reach audiences. Establishing solid public-private partnerships is, therefore, essential to build domestic sustainability, achieve food and health security and manage any emerging crisis. Today, world governments need to build new legislative, administrative and technical systems to integrate their roles and responsibilities with the private sector.

Winston Churchill once said, "Never let a good crisis go to waste" as he was working to form the United Nations after World War II. Humanity has faced, and is still facing, a major crisis that extends across borders, cultures and races; a crisis that proved the world can be brought shuddering to a halt. While the crisis has cost us so much, our real loss will be failing to provide our future generations with a better and more adaptive world.

World governments have to answer big questions with transparency: what is the role of governments in the future? How will government work change? What type of international relations will secure the interests of all parties involved during any upcoming crisis? How will science and scientists define our future? How far should governments invest their resources in supporting new research that seeks to find solutions to emerging challenges?

Most importantly, governments should question: Has the global health crisis made countries more humane and compassionate? Has it drawn people closer and united nations towards building a better future for humanity? Will COVID-19 present a pivotal moment and an opportunity to wave goodbye to old inefficiencies and practices and embrace a smarter, cleaner, kinder world?

Geopolitical dimensions of energy conflicts in the...
Is Dubai really the "party capital" of the Middle ...