Expatriate workers struggle in the Gulf 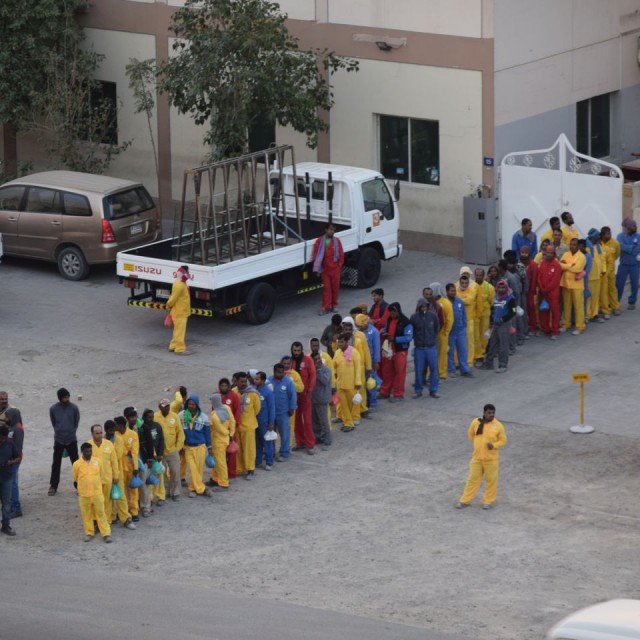 One of the repercussions of COVID-19 in the Arabian Gulf countries is the impact that it's having on migrant workers. They do most of the work in these countries- especially in Kuwait, Saudi Arabia, United Arab Emirates and Qatar, (the latter two countries are heavily reliant on migrant labour, particularly for Expo 2020 and Qatar 2022 respectively) but get little pay and can't leave if they wanted to, because employers confiscate their passports. They live in poor conditions in labour camps, don't have health insurance, and many are unemployed. Although COVID-19 is spreading very rapidly in these cramped conditions, the local populations are largely unscathed by the virus.

The local population, who blames foreigners for the spread of COVID-19, believes it can fill the gap left by foreigners who did most of the labouring and menial work. Will the local population do this? It's doubtful. Many locals get paid way too much and won't do any work they believe is beneath them. Let's see.

This article from the UK's Guardian highlights the problem the Gulf countries face, especially the inequalities that abound.

Crammed into work camps, stood down from their jobs, facing high rates of infection and with no way home, hundreds of thousands of migrant workers are bearing the brunt of the coronavirus pandemic in the Middle East, migrant advocates and diplomats say.

Such workers' risk of exposure to Covid-19 is so high, rights groups say, that host countries need to offer the same protections granted to their citizens or face the threat of a rampant outbreak that proves ever more difficult to contain.

Concern is focused on the wealthy Gulf states, where migrant labour makes up half or more of the population. Gas- and oil-fuelled economies have lured millions of low-skilled workers from south and south-east Asia and Africa over recent decades.

Construction workers are now mostly confined to dormitories, far from the skylines and stadiums they had been building, and stripped of their incomes. The same applies in the retail and energy sectors, staffed almost exclusively by foreign labour.

"The problem is in the dormitories, as social distancing can be organised in the dining areas," said Ryszard Cholewiński, a senior migration specialist with the International Labour Organisation. "There have been attempts by a number of companies to sort out sleeping arrangements, but even on a good day in some of these facilities, people are four to a room."

Across the Gulf states, migrant workers account for high proportions of Covid-19 infections. In Kuwait, the UAE and Bahrain, official figures suggest nearly all cases have been among foreigners, many of whom live in labour camps.

A report released by the Business and Human Rights Resource Centre this month noted that migrant workers in the Gulf "live in tightly packed labour camps, often in unsanitary conditions, some without access to running water.

"These conditions provide the perfect conditions for the spread of Covid-19. Quarantines and other movement and travel restrictions … may inadvertently raise the risk to workers, as well as result in workers suffering severe economic consequences from being unable to work," the report said.

The rate of infection among migrants has shaken Gulf states, which – mindful of the reaction of their citizens – have stepped up efforts to repatriate large numbers of workers, often meeting little response from home countries.

While Gulf states have offered healthcare to migrants who have tested positive for the virus, there are concerns among migrant communities that state authorities are reluctant to comprehensively treat the large numbers of carriers in camps.

"They have been here three times and done testing and some of my friends have been taken away," said Iqbal Rashid, a construction worker from Pakistan in a camp in Qatar. "But there are many others here who are sick. And even if I wanted to go home, who is going to help me? My government? Their government? We are stuck and helpless."

Regional states have acknowledged that the camps are ideal incubators for the disease, but they appear to be balancing the risk to workers against a threat to the broader community.

The spectre of migrants being disproportionately affected by the virus while citizens are largely spared has cast fresh light on the near total dependency of some of the world's richest countries on migrant labour to power their economies.

Migrant workforces are building football stadiums across Qatar to be used in the 2022 World Cup, the Expo 2020 facilities in Dubai and much of the infrastructure for the G20 summit due in Riyadh in November. The high rate of deaths among Nepalese construction workers in Qatar has been frequently condemned by labour groups. Qatar has railed at the comparison and claims to have improved workplace conditions.

Upwards of 40,000 Pakistanis in the UAE have registered for repatriation, and Abu Dhabi has threatened to revisit labour relations with India if it does not cooperate with efforts to return its expatriates.

Tags:
UAE
The impact of COVID-19 on people-powered protests ...
How financial institutions outside the banking sec...

Dubai's Royal Household is in the spotlight.