Egypt and the new geopolitical map 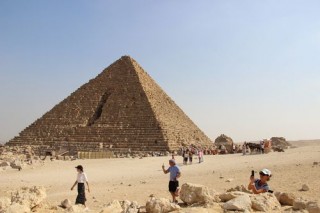 Relations between Egypt and Russia are getting closer, moving away from the US. How did this happen and what does it mean for geopolitics in the Middle East? Ahmad Abdel-Rahman, based in Egypt, explain why this might be.

The international geopolitical map continues to change​ and these changes are leading to a significant shift in the interests of different countries. Until recently, the world was living under a uni-polar system dominated by the USA but now it is looking for a new harmony through which international conflicts are shaped.

Egypt seems to be one of the countries that has been strongly affected by these changes. For more than 30 years, this Arab country was the strong ally of the US in the Arab region. However, it is now looking for new alliances away from the US. Egypt seeks to completely change its direction and strategy. It wants to return to playing its pivotal and influential role in the Arab world, in particular, and, in Africa, in general. Since this role completely disappeared during the rule of President Mubarak, Egypt decided during the era of the current president, Abdel Fattah El-Sisi, to alter its alliances and build bridges with Russia, whose power is growing along with its status as an influential superpower.

In this context, the improvement in the Egyptian-Russian relations and the mutual visits of senior officials of the two countries have intensified in recent years. The on-going meetings between El-Sisi and his Russian counterpart Vladimir Putin are an indication of the start of a new phase in relations between the two countries. Within this framework, the two countries also signed what could be described as the largest Russian arms deal with Egypt, valued at USD 4 billion

There is no doubt that the Egyptian leadership decided to reformulate its international alliances which was imposed by the international geopolitical changes and the difficult circumstances n Egypt, especially during the Muslim Brotherhood's rule, which lasted only a year.

Since the situation was corrected on June 30, 2013, by the majority popular movement supported by the army, relations between Egypt and the Western countries that built their political agendas in line with the agenda of the Muslim Brotherhood have been shaken. It was very painful for Western countries to watch the Egyptian people wake up from their nap and redraw their future away from the conflict that Western countries sponsor and adopt.

Immediately, the countries of the EU announced the imposition of economic sanctions on Egypt, under the pretext of a coup against democracy that was launched in coordination with government officials under Al Sisi in Egypt. Since the American administration announced the suspension of American military aid to the Egyptian government, there was an increasing rift in relations between the new Egyptian government and the West, both sides sought to consolidate their positions and win the battle that took place on the ground between the Egyptian army and the extremist forces led by the Muslim Brotherhood. This battle became more and more intense with the West's insistence on changing the new equation in Egypt, in a way that would bring this country back to the orbit of Western patronage.

After the revolution of July 23, 1952, Egypt was looking for allies to help it in the process of building and modernization, and it tried to get close to the US, and asked Washington to help build the Aswan High Dam. The latter refused to provide Egypt with any assistance, which prompted the late President Gamal Abdel Nasser to turn towards the former Soviet Union, which hurried and built the High Dam on the Nile River. The construction of this dam was necessary to maintain Egypt's food security and to generate electricity. Soon, relations became strong between the two sides, until thousands of Soviet experts helped Egypt establish productive institutions and train the Egyptian army.

When Sadat came to power after the death of Nasser in 1970, he had a perception that 90 per cent of the global game cards were in the hands of the US. Therefore, Sadat decided to curtail relations between Egypt and the former Soviet Union, and in 1971, he expelled 15,000 Soviet experts who were working in Egypt. However, the military relationship between the two countries remained. The reason for its continuation until the 1973 war was the Soviets' desire to prove that Russian weapons will prevail over American arms. The former Soviet Union supplied Egypt with weapons in the 1973 war and built an air bridge with Egypt.

The last thing Egypt did with Russian sponsorship was a ceasefire agreement guaranteed by theUS and the Soviet Union. After that, the military relations between the two countries were cut off, and the Egyptian army changed its armament to American armaments, after theUS granted Egypt military aid of USD 1 billion and USD 300 million annually. This followed the signing of the Camp David Accords between Egypt and Israel.