Strong signals and the geopolitical considerations of Sisi's visit to Sudan 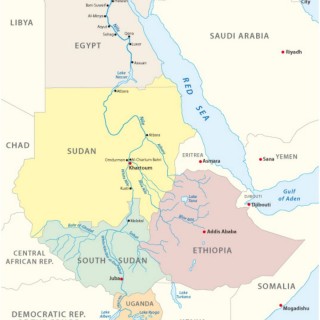 The visit of Egyptian president Abdel Fattah El-Sisi to Sudan on March 6 and his meeting with the head of the Sudanese Sovereignty Council, Abdel Fattah al-Burhan, sends important signals regarding geopolitical issues between the two countries. This visit also has implications for historical relations which make any political and regional approaches vital.

During the meeting Sisi and Burhan discussed ways in which bilateral relations could be strengthened at all levels.

They also discussed a number of regional and international issues of common priority and interest, especially developments in the Sudanese-Ethiopian border region. For example, there was the recent Sudanese moves in which it sought to extend state sovereignty on its eastern borders adjacent to Ethiopia.

Discussions between the two leaders were also aimed at reflecting a mutual understanding between the two sides to ensure the enhancement of capabilities in Africa so that African countries can face the challenges confronting the continent as a whole.

Undoubtedly, The Grand Ethiopian Renaissance Dam issue was at the forefront of the issues discussed by Sisi and al-Burhan. Complications about this issue arose after Ethiopia and negotiations across the African Union failed.

Egypt and Sudan agreed that on this issue the negotiations must be quadripartite under the auspices of the United Nations, the United States, the European Union, and the African Union. This move would reinforce what was agreed on in Cairo, Egypt, between the foreign ministers of Sudan and Egypt.

The Egyptian and Sudanese leaderships were brought together by the need for economic cooperation as well as their military and strategic agreements. The Egyptian president agreed to go ahead with the electrical interconnection project between Egypt and Sudan, as well as with commercial and investment projects.

The meeting between Sisi and Burhan also addressed the issue of Sudan's borders and the Sudanese government's right to manage and own its lands. In this respect, the Egyptian President promised to support the Sudanese government towards imposing control over its lands, protecting its national sovereignty, and seeking diplomatic means to resolve crises. There is no doubt that the Egyptian and Sudanese statements during the summit, that took place in Khartoum, indicate the size and quality of the relations between the two countries. Their common issues have also become the main basis for the external movements of Sudan and Egypt. The Egyptian and Sudanese statements also reflect their mutual eagerness to cooperate in various fields, despite the fact that the issue of the Grand Ethiopian Renaissance Dam has dominated discussions.

The cooperation between Egypt and Sudan may be the impetus for the beginning of facing the crises in African countries.

It can also be said that this model of cooperation was not a response to the crises facing the two countries. This Egyptian-Sudanese cooperation is a result of historic and regional relations.

This is, despite the fact that these relations have been witnessed to ebbs and flows because of the internal and local difficulties that these two countries have experienced. The evidence for this is that once

internal stability in Sudan and Egypt was achieved, each country regained their historical ties and a common destiny.

In contrast, the Egyptian and Sudanese statements affirm that the highest levels of coordination and challenges of respective interests characterise the external relations of these two countries.

This will continue to be reflected positively in its negotiations particularly with Ethiopia and the sharing of water quotas, given that Egypt and Sudan are the downstream countries of the River Nile.

The GCC's changing role and the challenges of the ...
How AI can help you to invest in clean energy