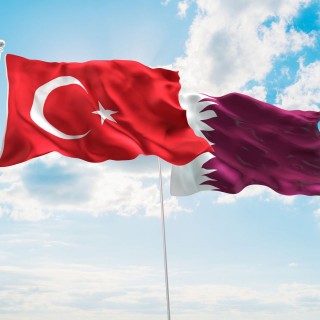 Qatar has used its deep pockets to influence Turkey. As someone who is interested in capital flows and investment, I was interested to read how cash-strapped Turkey is. In this regard, Qatar is helping.

By Mustafa Sonmez for Al Monitor

Scrambling to draw foreign investors to ease Turkey's hard currency crunch, President Recep Tayyip Erdogan's government has once again turned to its closest ally, Qatar. The two sides announced a raft of agreements last week, including fresh Qatari acquisitions, with Ankara eager to convey a semblance of renewed foreign capital flows to its crisis-hit economy. Government opponents, who charge that Ankara's economic bonds with the Gulf monarchy are politically motivated and lack transparency, however, meet Qatar's investments with suspicion.

The latest deals, announced during Emir Sheikh Tamim bin Hamad Al Thani's Nov. 26 visit to Ankara, include Qatar's purchases of a stake in Istinye Park, one of Turkey's largest shopping malls, and a 10% share in the Istanbul stock exchange. The European Bank for Reconstruction and Development had previously bought the 10% Borsa Istanbul AS stake, but divested it last year, irked by Ankara's appointment of Hakan Atilla — a Turkish banker who served jail time in the United States for helping Iran evade US sanctions — as the CEO of Borsa Istanbul.

Turkey's trade volume with tiny Qatar is no more than $1.5 billion, but Erdogan's government has been keen to draw chunks from the wealthy emirate's capital surplus to Turkey. The new agreements, which followed some controversial deals in previous years, triggered political wrangling at home, as opposition parties blasted Ankara for mismanaging the economy and then "selling off everything to Qatar." Is it so? What is the actual scale of Qatari investments in Turkey?

Although Qatar's territory and population amount to only 1.5% and 3.5% of those of Turkey, respectively, the emirate boasts more than $80,000 in gross domestic product per capita, compared to only about $9,000 in Turkey. Typically, Turkey posts a current account deficit of $25 billion to $30 billion a year, while gas- and oil-rich Qatar enjoys a current account surplus of up to $25 billion, which allows it to invest copiously abroad, mainly through the Qatar Investment Authority.

The foreign direct investment (FDI) stock in Turkey stands at about $150 billion as of last year, with the bulk — $101 billion — belonging to European investors, according to Central Bank data. The Netherlands is the leader with about $33 billion, followed by Qatar with some $22 billion.

Intriguingly, however, the Dutch investments — represented by giants such as Unilever, Shell, Philips and ING Bank — date back to the 1940s, while the Qatari ones have accumulated in the past five years of the Justice and Development Party's 18-year rule. The said period has seen a growing rapprochement between Ankara and Doha, including the deployment of Turkish troops in Qatar before and after the blockade that Gulf neighbours imposed on the emirate in 2017. With more than seven decades of investment history, the Dutch companies' share in the FDI stock in Turkey amounts to 22%, while the Qatari one has reached nearly 15% in only five years and is likely to swell further, given the ample collaboration appetite of both Ankara and Doha.

Another puzzling aspect is the sharp uptick in Qatar's direct investments in Turkey. In 2015, they totalled less than $1 billion before increasing to nearly $5 billion in 2016, nearly $6 billion in 2017 and $6.2 billion in 2018. How they jumped to $22 billion in 2019 is hard to fathom. One possible explanation is the extraordinary increase in the market value of the Qatari-owned QNB Finansbank. While less than 1% of the bank's shares are publicly traded, its market capitalization has exceeded $40 billion, outstripping by some $10 billion the combined value of Turkey's six largest private lenders and reaching some 20% of the total value of the Istanbul stock exchange. Such extreme surges are deemed unhealthy by market watchers.

Other major Qatari acquisitions in Turkey include ABank and Digiturk, the country's largest pay-TV operator. The Qataris have put money also in armored vehicle maker BMC, the ATV-Sabah media group, poultry producer Banvit, retailer Boyner and hotels in the resort town of Marmaris. The most controversial handover was that of Turkey's top tank factory last year. The 25-year operational rights of the factory in the northwestern province of Sakarya were transferred by a presidential decree to BMC, a joint venture between the Qatar Armed Forces Industry Committee and a Turkish businessman close to Erdogan.

The Qatari direct investments involve also purchases of real estate, including posh mansions on the banks of the Bosporus as well as land purchased by the emir's mother, Sheikha Moza bint Nasser, on the route of Canal Istanbul, a planned artificial waterway to link the Black and Marmara seas.

Besides direct investments, Qataris have put money also in stock shares and government bonds in Turkey, but no statistics are available on those sums.

More importantly, Qatar has rushed to aid Turkey's Central Bank, offering a currency swap line to bolster the bank's depleted foreign reserves and help stabilize the nosediving Turkish lira. In May, Qatar tripled the limit of the swap deal to the equivalent of $15 billion. Though the arrangement is not a lasting remedy, it has provided the Central Bank with a peg leg for a while.

Ultimately, Qatar's willingness to be Turkey's Johnny-on-the-spot has to do with its need for military support in a hostile neighbourhood led by Saudi Arabia. By granting Turkey a military base on its soil, the emirate has effectively received Ankara's word of protection. Its investments in and financial assistance to Turkey are largely seen as quid pro quo.

The importance of communication skills
The assassination of Iran's top nuclear scientist ...