Making the leap to entrepreneurship for seniors; why they are highly successful 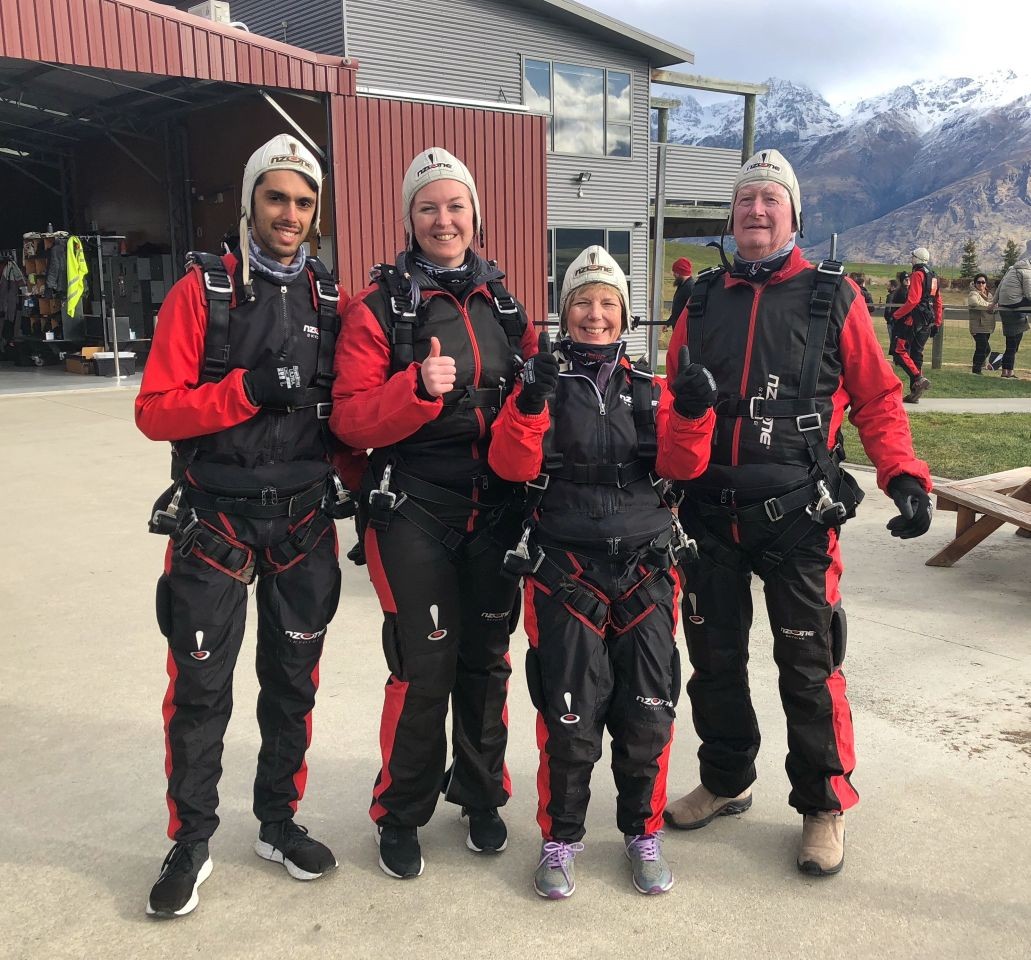 Lucia Dore (front). Pre-skydiving. "Seniors can do anything"

by Lucia Dore
Embrace the fear. That's the strapline on the website, NZOne Skydiving (https://www.nzoneskydive.co.nz/). I didn't really think about "embracing the fear " when I embarked on a skydiving adventure. Four of us, (I'm 58 and my father is 86) had to jump from a plane when it reached 12,000 ft, with a freefall for 45 seconds. through clouds which were icy and moist. Just as well we had a lot of clothes. Breathing was hard too.

However, in the previous group, somebody refused to jump. He/she kept holding on- (known as a "holder) and delayed everyone.

What did I learn from the experience? That no matter what your age you can do anything, and jumping wasn't as hard as it sounds. Bungee jumping is harder. For this, you have to jump from the edge, yourself. You can't be pushed. With tandem skydiving someone else does the work for you. The person with you jumps and you simply follow the crowd. You've got no time to think about what you are doing.

I learnt that embarking on any new journey is hard and that is not always youth who are most successful. Entrepreneurship is one such journey. Often it is not. Youth is not a magic elixir.

The most recent figures I could find are from 2018, from "The Conversation". The headline in its story states: "The most successful entrepreneurs are older than you think."

Investors in Silicon Valley have tended to invest in younger entrepreneurs, on the grounds that they are more innovative and creative than older entrepreneurs. That is not always true.

When the magazine looked at all businesses launched in the U.S. between 2007 and 2014, encompassing 2.7 million founders and comparing founder age to firm performance measures, including employment and sales growth, as well as the "exit" by acquisition or Initial Public Offering (IPO) it showed that successful entrepreneurs are much more likely to be middle-aged, not young. It found that for the top 0.1% of fastest growing new businesses in the U.S., the average age of the founder in the business' first year was 45.

It also showed that "middle-aged founders dominate successful exits. A 50-year-old founder is 1.8 times more likely than a 30-year-old founder to create one of the highest growth firms. Founders in their early 20s have the lowest likelihood of building a top-growth firm."

"Successful entrepreneurs are middle-aged, not young," according to Age and High-Growth Entrepreneurship, a paper by Pierre Azoulay and J. Daniel Kim of the Massachusetts Institute of Technology Sloan School of Management, Benjamin Jones of Northwestern University's Kellogg School of Management and Javier Miranda of the Census Bureau's Center for Administrative Records Research in 2018.
What this research showed is that age "predicts success, and sharply, but in the opposite way that many observers and investors propose, they wrote. "The highest success rates in entrepreneurship come from founders in middle age and beyond."


It's time to change the thinking that only younger people can embark on entrepreneurship. Studies show that older people are the most successful in launching businesses.

After more than 30 years involvement in the Middle...
How is Israel responding to the COVID-19 pandemic?