Is corruption behind Lebanon's explosion? 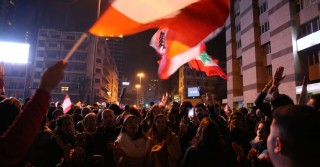 Protests in Lebanon before the explosion on 4 August.

The explosion in Lebanon shocked everyone, not just those in the Middle East. How could it have happened? How could a government be so corrupt that 2750 tons of explosives were badly stored at the port? Now about 220 people or more people are dead and many more are missing. About 300,000 are homeless...an horrendous number. The protests have resulted in the resignation of the entire cabinet. Although this might be a good thing, being without a functioning government is not good for the Lebanese. Corruption is far bigger than the State. This article, written just after the blast, looks at corruption.

The explosion in Lebanon's Beirut -by Al-Monitor

The destruction in Beirut is nerve-wracking. Streets and sidewalks are piled with debris and shattered glass that have fallen from damaged buildings — many beyond repair. The Aug. 4 disaster has left at least 149 dead and 5,000 wounded, with others still missing and some 300,000 people displaced from their homes.

Beirut governor Marwan Abboud said damages from the explosion, linked to some 2,750 tons of ammonium nitrate stored at the port, could reach $15 billion.

Throughout Aug. 6, a stream of cars continued to flow to the capital's worst-hit areas, packed with aid workers and civil society activists scrambling to provide people with food and shelter.

For those on Beirut's Hamra street, some 4 kilometers (2½ miles) from the port, the explosion first felt like an earthquake followed by a loud boom. The once-lively street was covered in glass and became nearly empty after experts warned people to stay home, seal their windows and wear masks when outside due to toxic gases released from the blast.

Tarek al-Hamish, a receptionist at Najjar Hospital in Beirut, described the aftermath of the explosion as a scenario that resembled a war. "It was something you see in the movies, around 150 patients were given first aid on the street at a speed that I've never seen before," Hamish told Al-Monitor,

The hospital suffered minor damages that prompted its staff to move some patients to other rooms. Ghazi Najjar, the CEO of the hospital, decided to provide free treatment to those injured from the blast, including patients who needed surgery.

The large explosion piled another tragedy on top of other crises already facing the country. Lebanon is suffering from an acute economic collapse, with its currency in free fall and an accelerating poverty rate, in addition to a coronavirus pandemic that has highlighted a health care crisis in the country.

"The hospital was already struggling with medical equipment due to the economic crisis, but on this day I think a divine power has intervened for we had everything we needed to treat the injured," Hamish said.

In downtown Beirut, Martyrs Square — the space that has witnessed every major Lebanese protest, including the Oct. 17 uprising — drew volunteers from all areas of Lebanon.

Mohamad Daher, 28, and his friends were volunteering their time to help with anything they could — from cleaning the streets to helping residents, as well as supporting experienced organizations such as the Civil Defense, a public emergency medical service.

"Now is the time to put everything aside and focus on helping the ones in need," said Daher, who came all the way from the town of Kfar Remmen in the south of Lebanon.

"We were really hoping for a better Lebanon after the Oct. 17 revolution, but then came the coronavirus and then the economic collapse, and now this catastrophe," he told Al-Monitor.

Nada Nasif, 32, took a break from volunteering to speak with-Monitor. She was working with a group that was working late into the night and camping in the square. "We are organized because unfortunately we have experience in rescue because of the fires that happened … and this made it easier to gather up quickly and work efficiently," said Nasif, referring to the massive wildfires the country experienced in October.

"The real problem we are facing is that with the economic crisis, everyone is in need of donations but our priority now is to help people who are mostly affected by the explosion," she said.

Gemayzeh and Mar Mikhael, two adjacent neighborhoods that are the hub of Beirut's nightlife and lie within 2 kilometers (a little over a mile) from the port, suffered severe damage to homes and properties during the explosion. Almost all residents of the areas were displaced from their homes and the ones who stayed had to sleep in houses with no windows, not to mention possible danger from toxic gas.

Shad Rizk, a 36-year-old network engineer at Terranet, was in his office in Mar Mikhael when a building at the port caught fire prior to the explosion. He started recording a video of the flames on his phone just when the port exploded, and glass from his office shattered in his face, leaving serious wounds.

"I will use this video when I apply for immigration, in the hopes that a country would give me a visa," Rizk told Al-Monitor. Rizk said people helped him go to the nearest hospital along with his five colleagues who were at the office and were seriously wounded themselves. "The hospital was insanely crowded, my wounds were so severe that so I could not wait for an empty chair and since I could not see, I had to ask some people to call my parents and take me to another hospital where I had to stay in for the night and unfortunately pay," Rizk added.

The night of Aug. 5, Gemayzeh was uncharacteristically dark, with not a single light in the area. Shop owners used their phones' flashlights to navigate the rubble and broken glass as they worked to clean up their businesses in the hopes that they would be able to reopen soon.

Nour Shamesdine, 25, was checking the wreckage with her friend as she was passing by Sip, a coffee shop she worked at in Gemayzeh.

Nour said she felt obliged to lend a helping hand to clean up what she could, especially knowing that the employees who were on shift when the explosion occurred were all seriously wounded.

"I don't think the owners have any plans of opening soon, I also think no shop owner has the money to repair anything," Nour told Al-Monitor

Meanwhile, Al Roum Hospital, located around 3 kilometers (2 miles) from the port, collapsed and became completely unusable as a result of the explosion. The hospital's CEO, Eid Azar, said all the patients, including 19 coronavirus cases, had to be evacuated.

Hanna Nehme, a security guard at the hospital, told Al-Monitor that the real challenge was transferring coronavirus patients to other hospitals.

"When I heard the sound of the explosion and saw the damage in the hospital, I thought it was the Israelis," he said. Initially there had been rumors that the blast may have been caused by an Israeli strike, following ongoing tensions between Lebanon's southern neighbor and Hezbollah.

"I never thought our politicians would hurt us even more," he added.

Are relations between Israel and the UAE normalise...
Lebanon's port explosion: how did it happen?