IS benefits from its manufacture of amphetamines 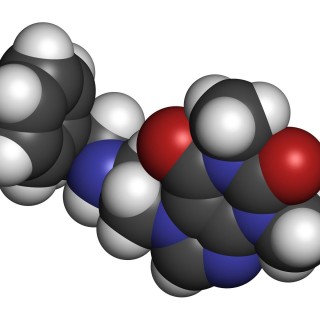 This is how the stimulant fenethylline is composed

I was surprised to read that Syria is the world's largest producer of amphetamines, or stimulant drugs. They speed up the messages travelling between the brain and the body.

This article tells how the Italian police confiscated 84 million Captagon tablets at the port of Solerno, south of Naples. The shipment was worth $1.2 billion, believed to be produced by Islamic State (IS).

Captagon is the brand name for the stimulant fenethylline, which was once used to treat depression, narcolepsy and ADHD. The United States and other countries have banned the drug for its addictive nature.

In what's being described as "the biggest seizure of amphetamines in the world," police in southern Italy have confiscated over $1 billion worth of drugs believed to be produced by the Islamic State (IS) in Syria.

The 84 million tablets bearing the Captagon symbol were discovered by police on Wednesday in the port of Salerno, south of Naples. Investigators say the 15-ton haul was stashed in three containers containing large cylindrical paper rolls.

A Twitter video published by Italy's finance police, known as Guardia di Finanza, showed the pills pouring out of the rolls as agents cut into them with chainsaws.

Guardia di Finanza said IS planned to sell its synthetic drugs on the European market where coronavirus lockdowns have hampered domestic sales. Given the shipment's $1.2 billion value, investigators believe a consortium of criminal groups were involved in its purchase.

"Many smugglers, even in consortiums, have turned to Syria where production, however, does not seem to have slowed down," the police statement read.

Known by its brand name Captagon, the stimulant fenethylline was once used to treat depression, narcolepsy and ADHD, but the United States and other countries have since banned the drug for its addictive nature.

Usually sold as a blend of amphetamines, caffeine and other substances, the stimulant remains popular in much of the Middle East, especially Saudi Arabia. The amphetamine-based drug's ability to inhibit tiredness and fear has also made it popular on Syria's battlefield, where IS militants and other armed groups are known to use it.

"We know that the Islamic State finances its terrorist activities mainly by trafficking drugs made in Syria, which in the past few years has become the world's largest producer of amphetamines," police said Wednesday.

In May 2018, the US-allied Maghawir al-Thowra militia in eastern Syria seized $1.4 million worth of Captagon during an anti-IS raid with coalition forces.

Tags:
Syria Italy Islamic State (IS) fenethylline amphetamine
Is the stock market a Ponzi scheme?
COVID-19: How the UAE is controlling the border