How the world looks upon Israeli expansion 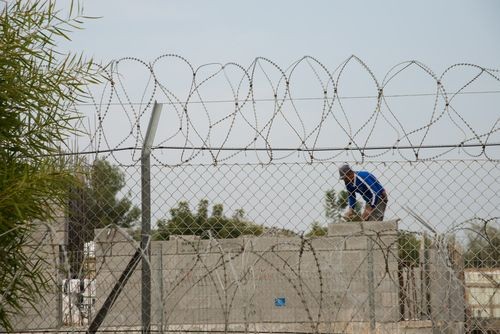 A Palestinian works in the Israeli settlement Mehola, West Bank.

The talk in the West, especially by President Trump, are the deals he says he has struck between Israel and the UAE and Israel and Bahrain. How these deals will pan out is not what the USA, or other parties in the West, will anticipate, I'm sure. Already, the Arab-Israeli faction in the Israeli Knesset has voted against the deal and not everyone is happy a "rapprochement" has happened.

These deals, along with the support of the US's President Trump, has meant that Israel is keener than ever to expand its settlement in the West Bank.

This article from Al Monitor helps to put these recent deals and events into perspective.

The foreign ministries of France, Germany, Great Britain, Italy and Spain called for an immediate halt to settlement construction in the West Bank.

A group of five European countries condemned the Israeli government today for its "counterproductive" decision to build thousands more settlement units in the occupied West Bank.

In a statement, the foreign ministries of France, Germany, Great Britain, Italy and Spain called for an immediate halt to settlement construction, as well as a pause in evictions and demolitions of Palestinian homes in the West Bank and East Jerusalem.

"The expansion of settlements violates international law and further imperils the viability of a two-state solution to bring about a just and lasting peace to the Israeli-Palestinian conflict," they said. "As we have emphasised directly with the government of Israel, this step furthermore undermines efforts to rebuild trust between the parties with a view to resuming dialogue."

During a meeting this week, Israel's West Bank Civil Administration, which approves settlement planning and construction, signed off on 4,948 more settlement units. According to the Israeli newspaper Haaretz, a majority of the new units will be located in the area between the Palestinian cities of Ramallah and Nablus.

The expansion makes 2020 the highest year on record for settlement construction since anti-settlement watchdog Peace Now began recording it in 2012.

Some 450,000 Jewish settlers and 3 million Palestinians currently live in the West Bank. The settlements, built on territory captured in the 1967 war, are widely viewed as a violation of international law and a threat to chances of a two-state solution.

The five European governments described the decision to build more settler homes as "counterproductive" in light of the recent normalization deals, adding that Israel's promised annexation pause must become permanent.

Under the US-brokered accords, Israel agreed to suspend its planned annexation of large portions of the West Bank. In return, Bahrain and the United Arab Emirates have formally recognized the Jewish state and agree to cooperate with Israel in areas such as trade, investment and tourism.

The Trump administration has called on other Arab countries, including Saudi Arabia, to strike their own deals with Israel. President Donald Trump has suggested as many as "five or six" deals are in the works.

The Saudi foreign minister downplayed chances of an Israel-Saudi deal in the near future. Prince Faisal bin Farhan Al Saud told the Washington Institute on Thursday that getting the Palestinians and Israelis to the negotiating table should be the priority of peace efforts before "eventual normalization."

What do the American elections mean for the Middle...
A deeper insight into 7G journalism and the future...