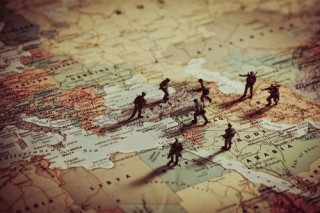 Soldiers are strategically placed around the Middle East

This article, written exclusively for LDC by Ahmad Abdel-Rahman, explains some of the tensions in the Middle East and the repercussions for the global economy.

Last year  witnessed many hot events and a number of global challenges which led to negative economic effects globally.

However, 2020 came with the expectation that the global economy would recover. The first signs of a recession resulted from economic problems in emerging markets and trade wars that raged during 2019.

After international economic institutions announced their expectations that the economy would recover again, in light of the monetary and financial policies pursued by various governments, the killing of the commander of the Quds Force of the Iranian Revolutionary Guard, General Qassem Soleimani, in the Iraqi capital, Baghdad, ignited political tensions throughout the region. This assassination also coincided with the Turkish intervening militarily in Libya, increasing the state of alert in the Middle East.

These tensions also came with security in Sudan in turmoil, and Lebanon in a state of instability caused by the explosion in the Port of Beirut and demonstrations that, arguably, negatively impacted the financial and banking system. These events were happening,alongside Syria's attempt to recover and rebuild its economy, despite the ongoing war in the country.

These new geopolitical challenges have brought the economies of the Middle East in particular and the global economy in general into a terrain that governments and international institutions have attempted to avoid over the past three years. These tensions and the sharp statements leaders of some countries have made have led to the spread of rumours that the world would soon enter a new world war -disregarding the negative impact of these rumours.

The financial markets in the Middle East were among the most affected by these tensions, triggeringa state of panic for investors, with many Arab stock exchanges suffering hefty losses. Gulf stock exchanges also witnessed  significant declines in the value of stocks.

Escalating geopolitical tensions also caused the Emerging Market Index (EMI), issued by Morgan Stanley, to fall.In addition, the cost of insuring Saudi Arabia's debts against default jumped to more than it was  before the Saudi Aramco oil facilities were targeted in September last year. Then, the EMI reached 65 basis points.

Consequently, five-year credit default swaps in Saudi Arabia are now more expensive than those in Indonesia- the first time in nearly two years.

With the entry of Iran as a major party in current conflicts in the Middle East and its obstruction of commercial transport in the Gulf region, the global benchmark, Brent crude contracts, witnessed a significant rise. The price of the US West Texas Intermediate (WTI) crude futures also increased. As the safest investment haven during times of political tension, gold prices were at a record high, at USD1,550 an ounce.

Heightened regional confrontation has also meant higher defense and military expenditure. Moreover, the price of oil also rose at a time when most countries are embarking on very ambitious plans to reform, diversify, and open their economies. Looking ahead, as the price of  crude oil falls, and as spare capacity becomes thinner (especially when compared to global oil consumption), geopolitical flashpoints in the Middle East will have a bigger impact on global markets. However, the short-term impact on prices is expected to remain small in the absence of a supply disruption from large oil exporters.

Geopolitical tensions are also expected to continue, especially in light of the blurring Iranian response to the assassination of its most senior military commander on Iraqi soil. On top of these issues, there is the failure to reach an agreement concerning events in Libya, the conflicts in Sudan, and the political situation in Lebanon. It is also possible that these tensions will limit the movement of foreign investments in the Middle East and North Africa, leading to a possible decline in market performance.