What happens to the refugees in Lebanon? 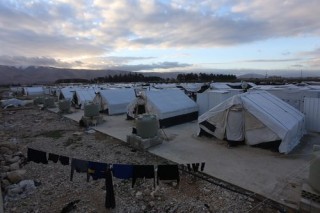 I've always had a great deal of sympathy for refugees-what they have gone through and what they sacrifice to succeed. This story explains this.

Large numbers of Syrian and Palestinian refugees in Lebanon remain in a very vulnerable condition.

By Tara Kangarlou at Al Monitor

BEIRUT — As Lebanon struggles to cope with the aftermath of the deadly Aug. 4 port explosion and a long-crippled economy, hundreds of thousands of people are sinking deeper than ever before. And with no signs of an international bailout, no effective political strategy in sight and a staggering rise in COVID-19 cases, many of the nearly 2 million Syrian and Palestinian refugees — large numbers of whom are unregistered — are among the most vulnerable casualties of Lebanon's state of demise.

"If 1,000 people die right now, nobody cares. Governments only think about business and their own benefits — we are just cards they play, we are just numbers," said Dr. Fares Alghadban, 35, a Syrian refugee who for nearly three years was the only physician in his war-ravaged town of Zabadani in the suburbs of Damascus.

Alghadban spoke with Al-Monitor in Beirut about how he surreptitiously escaped to Lebanon in 2017 after the Syrian regime accused him of supporting and tending to rebels. "You cannot imagine what it was like. So many of my friends and family members died — some in front of my eyes. I am a family doctor, but I did surgery, I delivered babies, I did everything I could for everyone. I wanted to help everyone."

When he first arrived in Lebanon, he, like most Syrian refugees, didn't have legal residency or permission to work. For the first year, he worked at a vegetable market to make ends meet for his family of five. And while he still can't legally work as a physician in Lebanon, with the support of a British friend and fellow physician, the doctor has established a charity mobile medical clinic that drives around Lebanon's Bekaa Valley and supports the various needs of not just Syrian refugees but the vulnerable Lebanese community.

"When the Beirut explosions happened, I drove down in my van and started helping the wounded. The tragedy was just like what I witnessed back home in Syria," he said. For Alghadban and thousands of other refugees and migrants the trauma of explosions, war and displacement is an ever-present reality in a place they once deemed as a safe haven.

Lebanon — a small coastal nation of 5.5 million — remains host to the largest number of refugees per capita in the world. None of the Syrian refugees, however, live in officially established refugee camps or communities.

"More than half of the Lebanese population live in poverty now, with 23% facing extreme poverty," said Elena Dikomitis, advocacy and information adviser for The Norwegian Refugee Council in Beirut. She told Al-Monitor that for the Syrian refugees that number has reached a staggering 83%.

Dikomitis said that in the absence of legal employment and adequate shelters and because of substandard living conditions, "in Beirut as well as other areas across Lebanon, refugees often live invisible lives."

The refugee council says the number of Syrian refugees without legal residency has continually increased and in 2019 reached over 78% of the refugee population. In part as of result of the impact of COVID-19 and the economic downfall in Lebanon, refugees often are the first in line when it comes to forced evictions and homelessness.

Dikomitis said funding for refugees' shelter needs is only 8% of what is needed at normal times, meaning further pain for Syrian and Palestinian refugees in the coming months. "What we are facing today is a catastrophe that comes on top of everything else that Lebanon is struggling to deal with," she said.

Looking at the crumpled balconies across the street through her broken window, Dalia Gh. (a pseudonym used to protect her privacy) recalled the exact moment of the port explosion. "My mom had called me on the telephone from Damascus to tell me that there's a fire in the port. It didn't take long until I heard 'boom.' I was screaming and crying, and she heard it all. I feel so bad; I feel so bad that she had to go through that," Dalia said in a tense voice.

Dalia, a journalist who is pursuing a master's degree in public policy, is an only child and left Damascus in the earlier days of the Syrian conflict in 2012. She is not a refugee, but a young immigrant who left her home country to attend university in Beirut and live in Gemayzeh — a place she used to call the "coolest neighborhood in the world." Even though she is a student and an immigrant, she still hasn't been able to get a proper residency permit from the Lebanese authorities.

"My hope here has died. I only have hope in people my age; I don't have hope in the state — any state." She told Al-Monitor that she never wanted to leave for the West — believing and hoping that one day she would be able to contribute to her community by staying and working in the region.

She speaks with a near-perfect American accent she said she mastered by watching Nickelodeon shows on satellite TV as a teenager in Damascus — a place she cannot call a safe homeland.

"It literally feels like nowhere is safe. I'm supposed to feel safe with my parents, but I can't even do that. I'm also scared for them." She attributes her fear of returning to Syria to the lack of job opportunities, the country's severe security presence and censorship that threatens her as a journalist, as well as the possibility of contracting COVID-19 and potentially infecting her parents in a country where ,according to Dalia, "finding proper health care is nearly impossible."

Many experts say Lebanon brought on some of its own problems through policies that were not thought out all the way through or at least not adjusted to account for changing circumstances.

Will Todman, an associate fellow in the Middle East Program at the Center for Strategic and International Studies, said that for the past couple of decades the Lebanese government deliberately put restrictions on refugees in an effort to prevent them from establishing permanent ties.

Todman told Al-Monitor that this "short-termism" policy toward refugees is contributing to the current socioeconomic problems.

Since the massive blast last month, the Lebanese government has still not complied with the international community's call for reform; thus, much of the foreign financial aid is being held back until such changes take place. All this pressure is now topped with new US government sanctions against two former Lebanese government officials whom the United States claims have ties with Hezbollah.

In his second visit to Lebanon since the port explosion, French President Emmanuel Macron told reporters that he needs to see real reform from the Lebanese leaders. This comes at a time when the collective sentiment on the ground in Lebanon is in praise of civil society and nongovernmental organizations for picking up the rubble and holding the nation together in the face of tragedy.

As Alghadban was preparing to drive back to his family in the Bekaa Valley, he told Al-Monitor, "It's the people who are doing what the government has to do — they're the only ones supporting one another."

For Alghadban and Dalia, no matter where they go or what the future holds — the trauma of life in two broken countries is too deeply rooted to forget.

"I feel like wherever I go, I'm not going to relate to anybody there. Nobody is going to understand what I've been through. I correlate being Syrian to something so negative and something that's stood in my way my whole life." said Dalia.

Dalia recalled the fourth day after the explosions, when there were only "four or five Syrian victims" among the official list of the deceased. She said many "nongovernmental organizations in the field later confirmed that that number exceeds 50."

What does peace mean between Israel and the Gulf S...
Assange Hearing Day 2