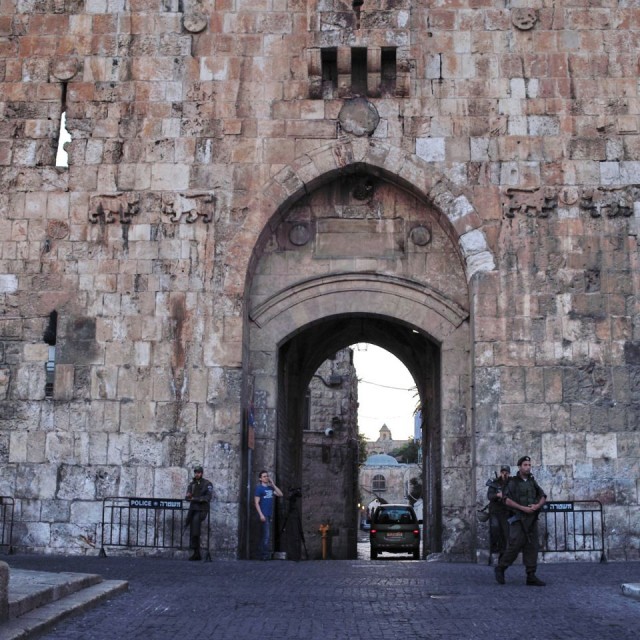 The killing of George Floyd by a white policeman in Minneapolis, USA, has reverberated around the world. One of the places where significant parallels are made is in Israel, where the Arabs feel marginalised and are targeted indiscriminately by police. The killing of autistic Palestinian man Iyad Hallak is arguably a perfect example of brutality by a police force that sees all Arab civilians as suspects.

I know when I was going to East Jerusalem, seven years ago, with a busload of Palestinians I was treated very differently from my fellow travellers, especially once the Israeli authorities knew I had two passports- British and New Zealand (I'm from the latter country). I read the article below with considerable interest and felt I was in Israel. I had guns pointed at me; the difference is that no gun was shot.

Israeli border police shot and killed Iyad Hallak, 32, of East Jerusalem, at the Old City's Lions' Gate on May 30. An initial investigation has found that the officers suspected he had a pistol, so they chased and fired on him. He was not, in fact, armed. Hallak, who lived in the Wadi Joz neighborhood, was autistic, so he attended the Old City's Elwyn Center for children and adults with special needs. According to reports, he had been making his way there on Saturday as he did every morning.

There is no doubt that East Jerusalem is a very tense space. When it comes to relations between Israelis and Palestinians, it is a powder keg that has known its share of terrorist attacks. Nevertheless, the question must be asked: Was this police brutality against Arabs? On May 28, Minister of Internal Security Amir Ohana posted on Facebook, "A person — any person — who attacks a police officer — any police officer — must know that he is risking his own life." Regardless of whether there is a direct connection between the post and what happened on May 30, the post could be interpreted as giving a green light for the police to shoot at will.

Hallak was shot while cornered in a back room at the Lions' Gate used to collect garbage. He could easily have been arrested or neutralized in some other way. After he was dead and everyone could see that he had no gun, the police and Shin Bet searched his home for something incriminating. If they had found anything, they could brand Hallak as a terrorist. His father, Kheir Hallak, said that they searched the house but didn't find a thing. Reportedly, they called Iyad's sister a "whore."

"The way it looks now, whenever the police see an Arab, he immediately becomes a target," one of Hallak's relatives, Hatem Awiwi, told Al-Monitor. "Iyad suffered from low-functioning autism. His whole life revolved around his mother, father and sisters. He wouldn't even connect with other members of his family. He certainly didn't know what Jews and Arabs are. Last Saturday, he was making his way to the Elwyn Center, like he did every day. He was wearing a mask and gloves because of the coronavirus. It looks like he was frightened by the police because of his condition, so he fled to the garbage collection room. Nevertheless, that didn't stop them from shooting him there, even after his counselor at the center started screaming, 'He's disabled!' Half an hour later, the police arrived at his home to conduct a search. They cursed at and humiliated the other family members, but they still could find nothing to incriminate him. After all, you can't incriminate a person like Iyad."

Awiwi's remarks that Arabs "immediately become targets" touches on the complicated relationship between Israel's police and civilians, particularly Arab civilians. A report by the Mossawa Center found that as of last year, 57 Arab civilians have been killed by the police since 2000, while almost none of the officers involved were charged. One of the best-known cases was the tragic deaths of Yakub Abu al-Kiyan and police officer Erez Levy on the night of Jan. 18, 2017, during the forced evacuation of the Bedouin village of Umm al-Hiran. Then-Minister of Internal Security Gilad Erdan and former Police Commissioner Roni Alsheikh claimed that the victim was a terrorist who supported the Islamic State. Internal Investigations eventually rejected the conclusion and found that there had been no terrorist attack after all. Three years after the incident, it was revealed that the policeman who fired the deadly shot told someone from the Shin Bet, "I did not think that there was an immediate threat to my life or the life of my fellow officers when I fired the shot."

The thread connecting these two incidents is security forces with loose trigger fingers and the idea that the police consider every Arab a suspect. When incitement against the Arab population permeates every part of the country from social networks to the government, as we saw during the last three election cycles, the associated is inevitable.

After visiting the grieving family in their home, Knesset member Ahmad Tibi of the Joint List told Al-Monitor, "This was a serious crime. They, the occupiers, shoot at and suppress the Palestinian population, wherever they are, including East Jerusalem. This time they shot an autistic young man who was terrified and looking for shelter. His counselor Warda screamed that he was disabled, but they kept firing anyway. They shot to kill, hoping for a citation. They executed Iyad. They shoot Palestinians and they shoot people with autism."

Protesters who gathered in Jerusalem and Tel Aviv after Hallak's killing linked the incident with the riots that broke out in the US city of Minneapolis, where a black man, George Floyd, was killed by a local police officer. The demonstrators held signs reading "Palestinian Lives Matter," a clear reference to the Black Lives Matter protests in the United States.

Yanal Jabareen, a social and political activist who helped organized the protests, told Al-Monitor, "When we first heard reports of the horrific murder of Iyad al-Hallak in the Old City, 200 people, Jews and Arabs alike, marched from King George Street to the police station in the Russian Compound. We need a committee of inquiry and an end to the occupation and abandonment of East Jerusalem for the past 53 years. We will not allow another murder to take place and we will not be silent about Iyad's murder. We will stand with the family. We will be its sons, and we will continue our struggle for peace, equality and social justice in Jerusalem."

What is the future for seniors?
How to reduce costs in the Gulf countries: Oman