Are more sanctions on the Syrian regime the right way to go? 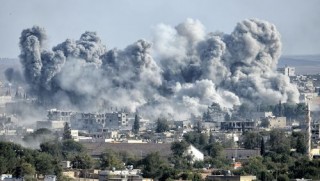 An explosion after an apparent US-led coalition airstrike on Kobane, Syria, as seen from the Turkish side of the border, near Suruc district, 24 October 2014, Sanliurfa, Turkey
There is little to suggest that the Syrian War, which has run for nine years, is likely to end soon. Nonetheless, the US State Department is expected to announce on Wednesday (US time) the first round of targets under the so-called Caesar Act. One of the aims of the sanctions is to stop the Syrian regime from seeking foreign investment to rebuild the devastated economy, the infrastructure in particular.

Will the imposition of more sanctions by the US on Syria prevent the regime and its cronies from making any more money out of the war, or will it be the Syrian people, most of whom are living below the poverty line, take the brunt of the suffering? Any sanctions are likely to lead to price increases and shortages. .

In 2013, there was a conference in Dubai about rebuilding Syria, where attendees, many of whom were investors, were looking at providing recovery finance to the war-torn country. (I was present). However, there was the expectation that Bashir Al-Assad would be overthrown and a new president installed. Is that likely?

What we do know is that the current Syrian regime and its security services will not suffer from a shortage in fuel resources and food. Their children will continue to be educated in the best schools of Damascus. The "people's palace" on Mount Qasiun and the presidential offices in the Rawda neighborhood will not be cut off the electric grid.

It is likely that as the Syrian people fall into more poverty, more people will be vulnerable to the influence of pro-Iranian and Salafi-jihadi extremists

The influence of the West, especially the United States, in the Middle East is strong. Yet would it not be better for the focus of the West to be on the promotion of coexistence, tolerance and equality rather than on the wealth of the rulers and applying sanctions?

The article below explains the current situation in Syria and how the imposition of sanctions by the US may not be the answer.

By Elizabeth Hagedorn for Al Monitor.

On Wednesday, the US State Department will announce the first round of targets under the so-called Caesar Act.

In a scene reminiscent of the early days of the Syrian uprising, a man waved the tricolor flag of the revolution as hundreds of protesters marched through the streets and chanted for the ouster of Syrian President Bashar al-Assad. "We want our homeland to be free," they shouted.

The ongoing demonstrations in Suweida, a government-held province populated mostly by the Druze religious minority, marked a rare display of defiance against Syria's longtime dictator, who protesters blame for the country's rapidly deteriorating living conditions.

"What is happening in my city is what should have happened a long time ago," said one Suweida activist who spoke on condition of anonymity when reached via phone. "It is a natural extension of the Syrian revolution in 2011."

Fueled in part by a financial crisis in neighboring Lebanon, Syria's currency has hit all-time lows as the lira's value came crashing to 3,000-to-one US dollar last week. The deepening currency collapse is just the latest hardship for the population, an estimated 83% of which lives beneath the poverty line.

The Syrian government blames the current situation not on its own mismanagement, but on the "economic terrorism" imposed by the United States in the form of sanctions. On Wednesday, the US State Department will announce the first round of targets under the so-called Caesar Act, a law named for the Syrian military defector who smuggled out of the country tens of thousands of photographs that documented torture and murder inside the regime's prisons.

Signed by President Donald Trump in December, the bipartisan law expands on existing sanctions that target Syrian officials and allows for sanctions on foreign persons or companies that do business with the government, specifically in the construction, engineering, energy or aviation sectors. Targets also include anyone who provides support for the government's military operations or those of its main backers, Russia and Iran.

"The Caesar bill alone is not a silver bullet that will end the killing in Syria," said Mouaz Moustafa, the executive director of the Syrian Emergency Task Force, a DC-based nonprofit that helped draft the legislation.

"But at the same time, the Caesar bill is a major warning. It's a warning not just to criminals in Syria, but to anyone working with them or even thinking about working with them," he said. "It should be a comfort to Syrian civilians because it is coming to punish those that are forcing them to live in poverty."

The sanctions arrive as Damascus is courting foreign investors to foot the bill for rebuilding the country it burned to the ground. The government puts the costs of doing so at $400 billion, while outside analysts say the price tag could be as high as $1 trillion. The Caesar sanctions would make attracting that kind of reconstruction funds virtually impossible.

"We have a context in which the Syrian regime is singularly vulnerable right now and has very few options for accessing any kind of external resource on a meaningful scale," said Steven Heydemann, director of Middle East studies at Smith College and senior fellow at the Brookings Institution.

"The logic is that by amplifying pressure, raising the costs of third parties engaging with the regime, it may be possible to push the regime into a position into which it would make some concessions it hadn't previously considered," Heydemann said. "What does it do when Iranian and Russian lines of credit are closed? What does it do now that the Syrian lira has collapsed?"

US policy-makers maintain the broad penalties are designed to harm only Assad and his cronies, not the long-suffering Syrian people. But as the economic situation becomes increasingly dire, many Syria watchers warn of the indirect impact sanctions could have on civilians.

"Why are we punishing civilians after they have been displaced multiple times?" said Basma Alloush, policy and advocacy adviser at the Norwegian Refugee Council.

"Now to pour salt on the wound and say, you can't rebuild for another five years because of Caesar and because we think it's going to create regime change or accountability or justice — that's where I disagree."

Humanitarian exemptions are built into the law so that much-needed supplies including food and medicine can reach the population. But given the complex waiver processes in place for existing Western sanctions, some worry the new measures could have a chilling effect on aid organizations.

"When there's a risk of falling afoul of serious US sanctions, you're going to self-censor. You're going to be risk-averse," Alloush said.

Humanitarian assistance is already extremely limited due to Russian obstruction at the United Nations Security Council, which in January reduced the number of official border crossings humanitarian groups use to bring aid to opposition areas. There are mounting concerns that Assad's main patron will use a vote this summer to choke off remaining aid to rebel-held Idlib province.

"Here you have a government that's complaining about the impact of sanctions on citizens and yet is restricting citizens from access to some of the resources that would help them alleviate the effects of this economic crisis," said Heydemann.

Caesar supporters point out that the Syrian economy would continue its downward spiral with or without US sanctions in place. Dollars are no longer flowing from Lebanon to Syria, staggering war debts have accumulated and much of the country is left in ruins — all of which is compounded by the dual shock of the coronavirus pandemic and collapsing oil prices.

But the mere anticipation of additional sanctions has likely factored into Syria's recent economic woes, said Julien Barnes-Dacey, the director of the Middle East & North Africa program at the European Council on Foreign Relations.

"I'm pretty convinced that the Caesar measures have been priced into this collapse. There's a real uncertainty about what's to come. A lot of Syrians are very much fearing the worst," he said.

"I very much see Assad as the prime problem and driver of Syria's economic collapse. My fear is just that the US measures, which fit into a broader sort of maximum pressure campaign, effectively push the country in the same direction as Assad."

Pharmacies are increasingly unable to stock even the most basic of medications and the cost of fuel has skyrocketed. Soaring inflation has meant an entire average monthly salary in Syria can buy no more than two watermelons.

As the population starves, members of Assad's inner circle have carried on amassing tremendous amounts of wealth by circumventing US and European sanctions. It's those same loyalists and businessmen who stand to benefit from lucrative reconstruction contracts.

"The regime has been incredibly savvy in creating black market systems and back channels," said Jomana Qaddour, a nonresident senior fellow at the Atlantic Council.

Paralyzing the regime's shady business dealings could impact Russia's bargaining on the political track, said Qaddour, who sits on the UN-facilitated constitutional committee consisting of representatives from civil society and Syria's warring sides.

"The Russians kind of brought the Syrians to the table kicking and screaming, telling them if we go through these motions, then maybe we can get these sanctions not implemented or not applied," Qaddour said. "If there's any result [from sanctions], I think it might push Assad and his allies to be more cooperative on the political track. [But] there are no clear indicators that that's the case."

Under the new Caesar law, Syria must meet a number of onerous requirements for sanctions to be removed, including releasing all political prisoners and providing "meaningful accountability for perpetrators of war crimes."

It's the lack of justice that the Suweida activist says brought her to the streets in protest.

"The ruling regime is a criminal regime that has killed and arrested hundreds of thousands of free Syrian people who refused to obey," she said. "Therefore, we must shout louder, work harder, [and] speak up fearlessly."